Listed below are the key features and specifications for the Subaru BRAT.  The listed data is for stock BRATs and could be different on any used model as BRAT owners have been known to modify and customize them. 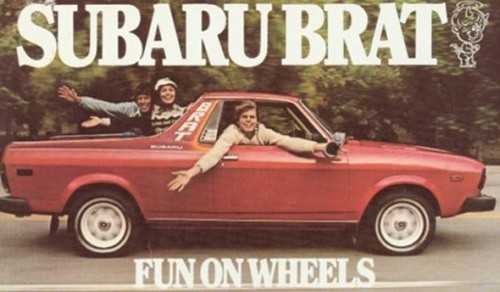 The BRAT’s drivetrain was designed with weight and versatility in mind to target both rural users along with off-road enthusiasts.  The initial engine offered was a 1.6-liter EA-71 horizontally opposed four-cylinder engine making 67 horsepower.  This was quickly replaced during the 1982 design update with a 1.8L EA-81 increasing the hp to 73.  (These updated BRAT’s are easy to spot because the rounded headlights were replaced with rectangular ones).

A popalar version of the BRAT was made available as an option for 1983 and 1984 model years which featured a 94hp turbocharged STI engine.  The turbo engine model was also where 3-spd auto transmission models can be found as the 4-spd manual was standard with all other BRATs.  A single-range transfer case was used throughout the BRAT’s production however a dual range t-case was offered with later and GL models.

Anything else to add?  Let us know in the comments section below…